The membership lists published in the World Science Fiction Convention (WSFC) sources for any given Worldcon, which consist of progress reports and program books, were compiled in one database indicating each person’s name and the Worldcon(s) of which they were a member. In addition, membership lists from the registration records were used for several years (1989, 1992, 1993, and 1998). All data sources used are listed in Appendix A in chronological order by Worldcon.

Since the names listed in the progress reports and program books are only for those people who registered ahead of time, it is to be expected that the total number of names from WSFC sources does not match the total membership as reported in the Long List of World Science Fiction Conventions (hereafter the “Long List”), also referenced in Appendix A. In addition the Long List is based on a variety of documents, mostly convention publications, and fans reporting on Worldcons at the time focused on the number of attendees – people who were physically present at the convention, not the number of members – people who purchased memberships to the convention in order to receive its publications by mail. It is also important to note that, for the same reason, the sample studied is not randomized.

For data analysis spanning multiple Worldcons, the assumption is made that an identical name appearing on different membership lists always refers to the same person.

Gender determination based on name is commonly used to extract the otherwise unavailable data from lists of names. Three different methods were used to do so. For all methods, gender was first assigned based on honorifics. In addition, members who only had first name initials listed, as well as organizations and other non-human entities were assigned a gender of “Other”.

Method 1. The first method consists of consulting several websites on the meaning of names (Behind the name, n.d.; Meaning of names, n.d.; Names, n.d.) and assigning gender according to the gender listed on the website. In the case of names not listed in any of these sites “Other” was selected as the gender. The same was done with gender neutral names.

Method 2. The second method is to run the list of names through the Genderize.io (Genderize, n.d.) application-programming interface (API.) Since Genderize provides a probability factor for the gender of each name, this can be used to assign a weighted estimate for gender neutral names. Names where the API returned a result of “null”, meaning they are not in the database consulted by the API, were labeled “Other”. If the gender of a specific person is known, it was assigned a probability of 100%, regardless of the result given by the API. The advantage of this method over method number three outlined below is that genderize.io incorporates not only first names, but also common nicknames, e.g. Jim, Pat, Liz, etc…

Method 3. The third method is to do a statistical analysis using the genderdata package (Mullen, 2015) for R (a statistical analysis software.) In addition to assigning a weighted estimate for gender neutral names, like the Genderize.io API, it also takes the estimated year of birth of each person into account. The downside is that for the time period concerned only data for the United States is available. This is mitigated by the fact that the large majority of Worldcon members at the time were from the U.S. This is supported by the souvenir books of those Worldcons that published membership maps. For year of birth, as the package can provide a gender estimate for a range of years, it was assumed that members registered for their first Worldcon between the ages of 18 and 40, inclusively. Again, if the gender of a specific person is known, it was assigned a probability of 100%. If the package did not return any results, meaning a name was not in the database consulted, it was assigned a gender of “Other”.

Figure 1 compares the yearly totals of the WSFC data (column 2 of Table 1) to those of the Long List (column 1 of Table 1). What can be seen immediately is that, following the marked growth in the mid to late 1970s (seen in the previous report covering 1961-1980), the membership seems relatively stable, with only 3 conventions with more than 7000 members, 2 with less than 3000, and no clear trend either upwards or downwards. We see some years for which the number of names listed exceeds that of the estimated number of attendees (1981, 1985, 1992 and 1994). This is likely because the numbers in the Long List for those years only includes attendees and not Supporting members, people who purchase a membership in order to support the convention, receive convention publications by mail, but not attend. The year with the smallest proportion of names listed are 1983 and 1984, both with about 60% of the membership as reported in the Long List.

Table 2 details the same WSFC data as a function of the number of Worldcons attended up to that point in time by members each year. We can then compile these numbers to know how many people attended only one Worldcon in the period surveyed, how many attended two, and so on. This compilation is done by looking at how many members return in a given year and which ones do not. Note that Table 2 takes into account Worldcons attended between 1939 and 1980.

The compiled results, shown in the last line of Table 2, shows that a large majority of Worldcon members only attended a single Worldcon, and the number of members goes down rapidly as the number of Worldcons attended increases and seems to follow an inverse logarithmic curve.

Figure 2 compares the number of first-time members (Column 3 of Table 2) to the total of the WSFC data (Column 2 of Table 2).

Table 3 compares first-time members to the total of the WSFC data. Figure 3 shows the ratios listed in Column 4 of Table 3.

In Figures 2 and 3, we can immediately see that, in general, the larger a Worldcon’s membership was, the more new members it attracted. The correlation coefficient between the two is high enough (0.83) to say there is a strong relationship between the two.

Table 4 shows the gender breakdown of each convention by year for all three gender determination methods used, as well as the averages (columns 4, 9 and 14 of Table 3) and standard deviations (columns 5, 10 and 15 of Table 3) for each value. The values given by the three methods are statistically close enough to be able to average them and use the minimum and maximum values as the margin of error on the results.

Figure 4 shows us the gender balance by year using this average. Unlike previous periods surveyed, there is no clear overall trend. However, while we still see a smaller proportion of female members in non North American conventions (1985, 1987, 1990, 1995 and 1999), the trend for overseas Worldcons does show an increase in the proportion of female members and a decrease in the proportion of male members, until, by the end of the period surveyed, they are almost the same as for North American conventions.

Table 5 shows the gender breakdown as a function of the number of Worldcons attended.

As the number of members who attended twenty-seven or more Worldcons is very low, these cannot be used as a statistically significant sample, but the remaining members, i.e. those that have attended fewer conventions, can be. Figure 5 gives us the same data in graph form for members who attended 26 or fewer Worldcons. The proportions remains steady for up to thirteen conventions attended. Beyond thirteen conventions attended, we see quite a bit of variation with an overall trend showing an increase in the proportion of male members.

– When compared to previous periods surveyed, Worldcons’ membership numbers were relatively stable, with the major drops in membership easily explainable by the geographic location some Worldcons.

– When compared to previous periods surveyed, gender balance seems, for the most part, to have stabilized.

Finally, it must be noted that the tables and charts presented reflect observations on the population of Worldcon memberships from 1981 to 2000, but do not explain on their own why any variations observed happened. In other words, they reflect the effect of events and not the cause of them. For this, further research would be needed. Questions of interest include:

– What major events in and out of fandom affected the membership of Worldcons both in terms of size and composition?

– Does the relative stability in the number of members and gender breakdown observed continue in subsequent Worldcons? 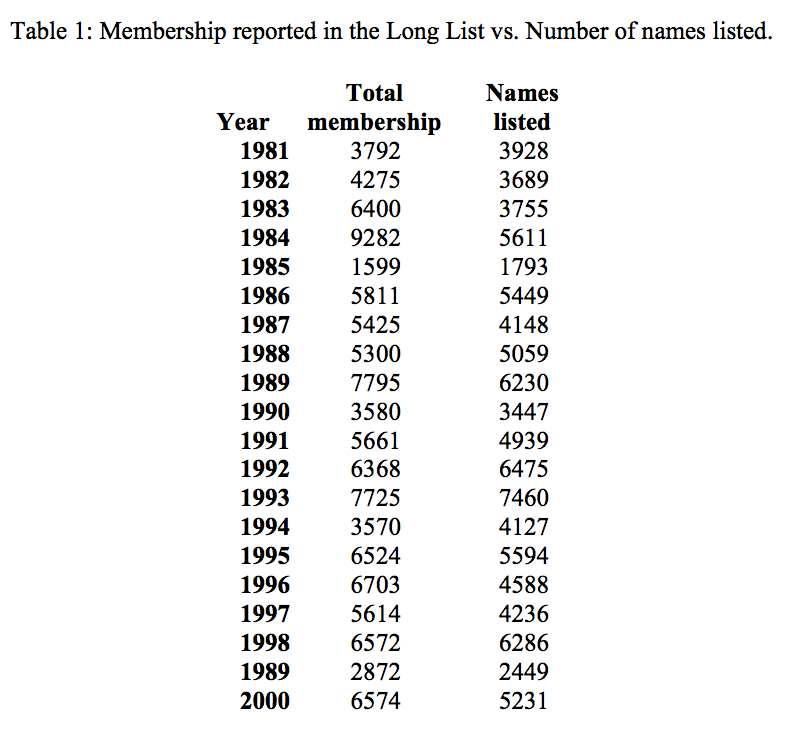 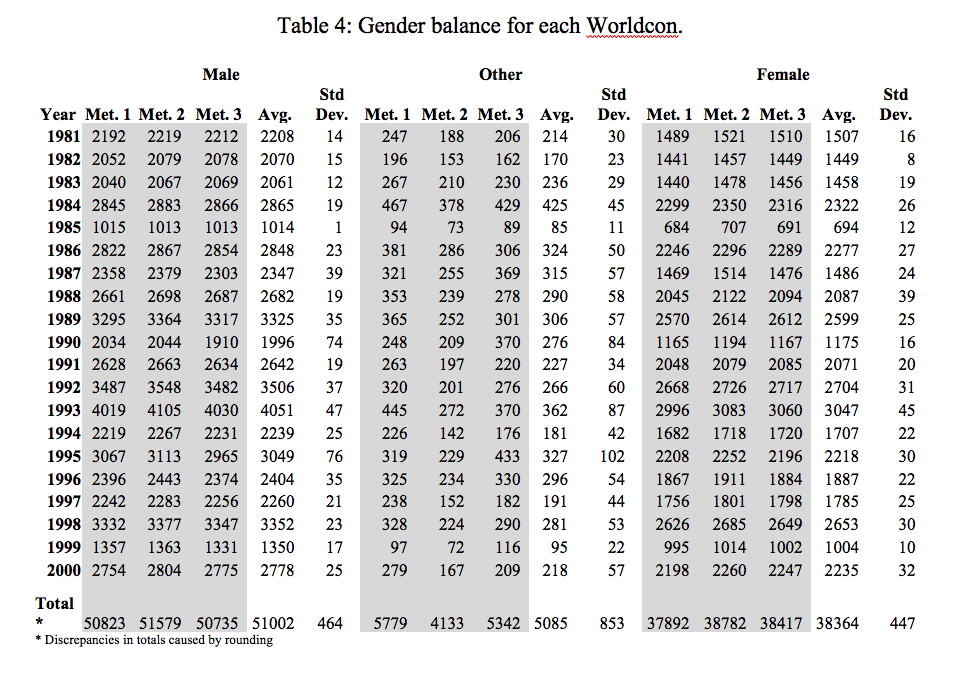 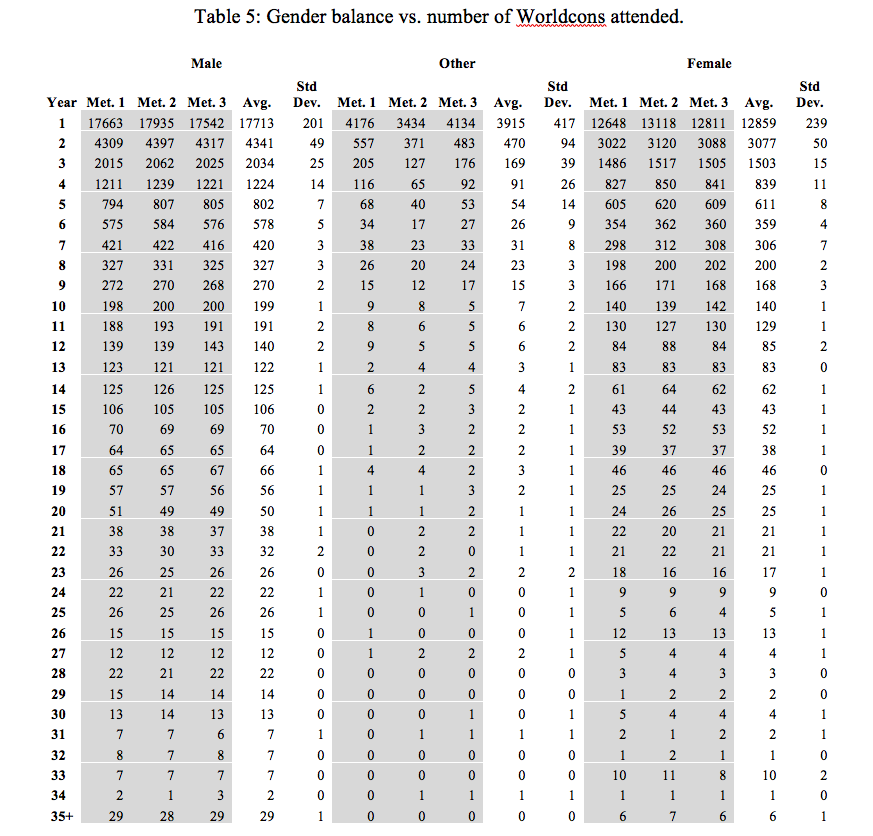 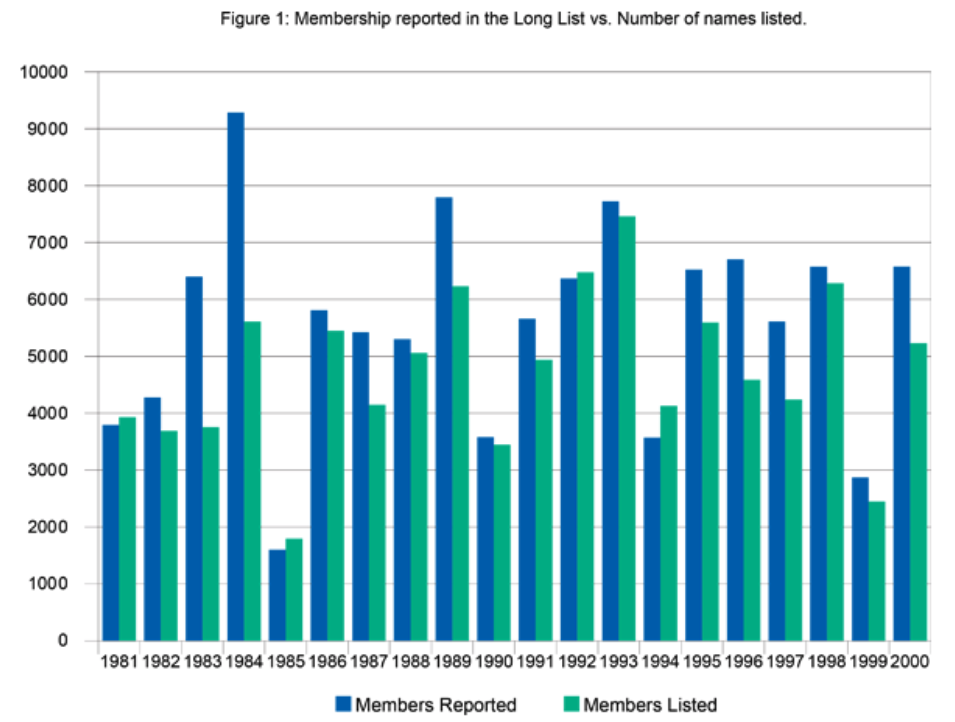 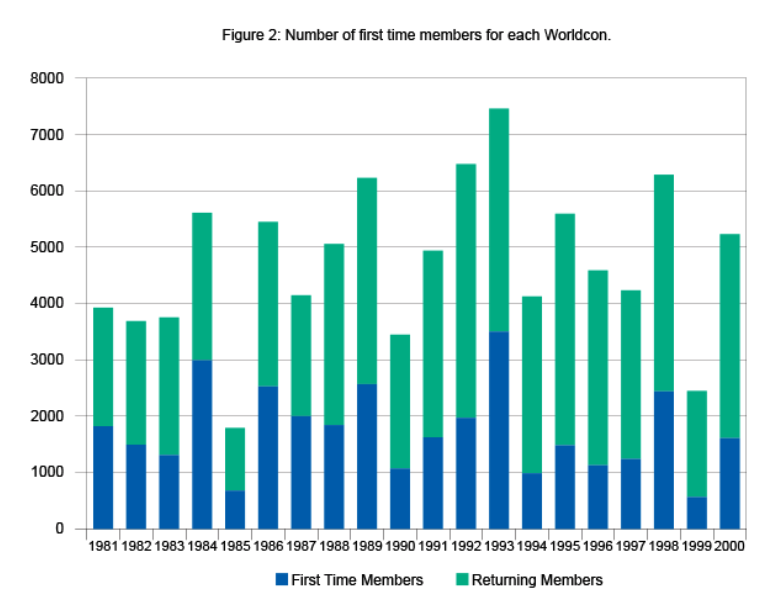 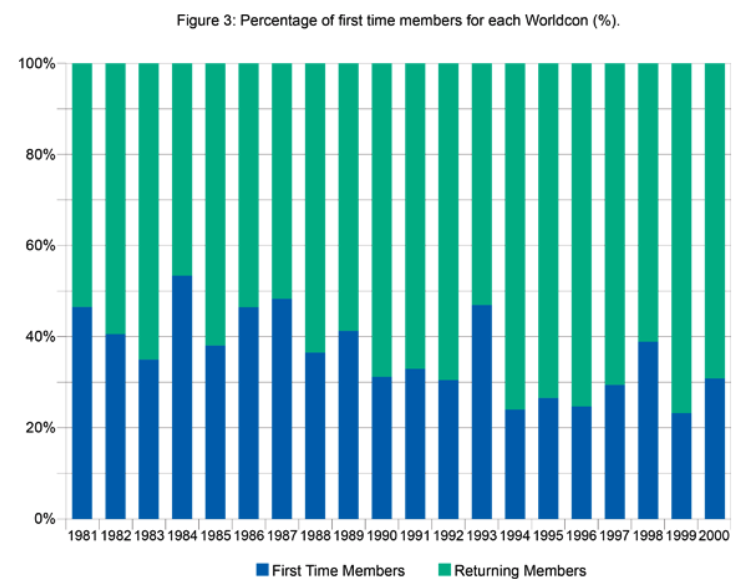 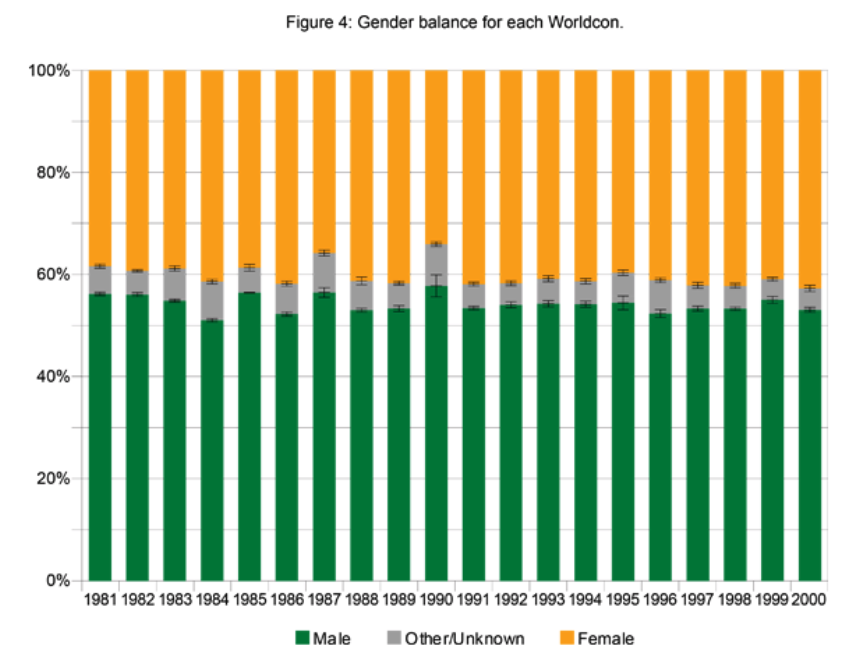 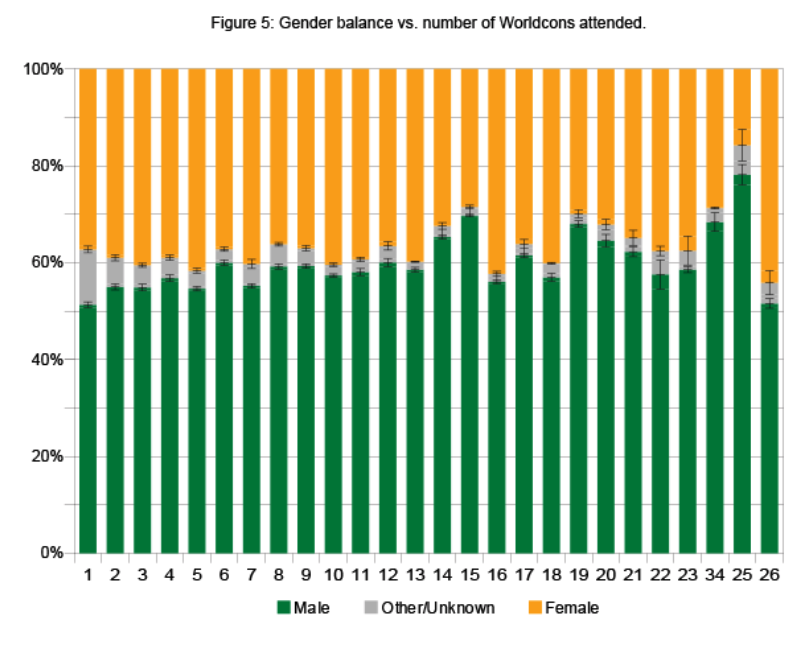 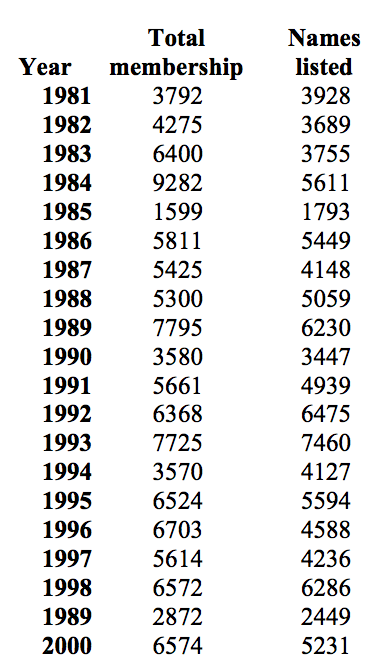 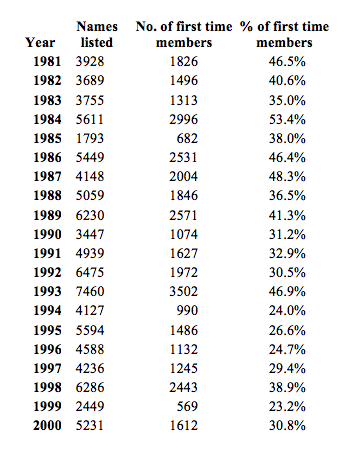 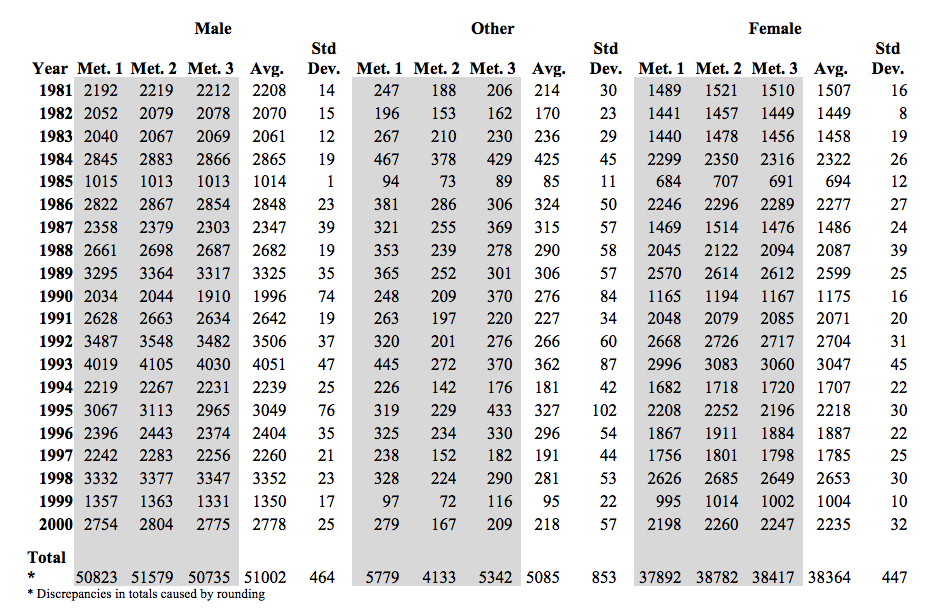 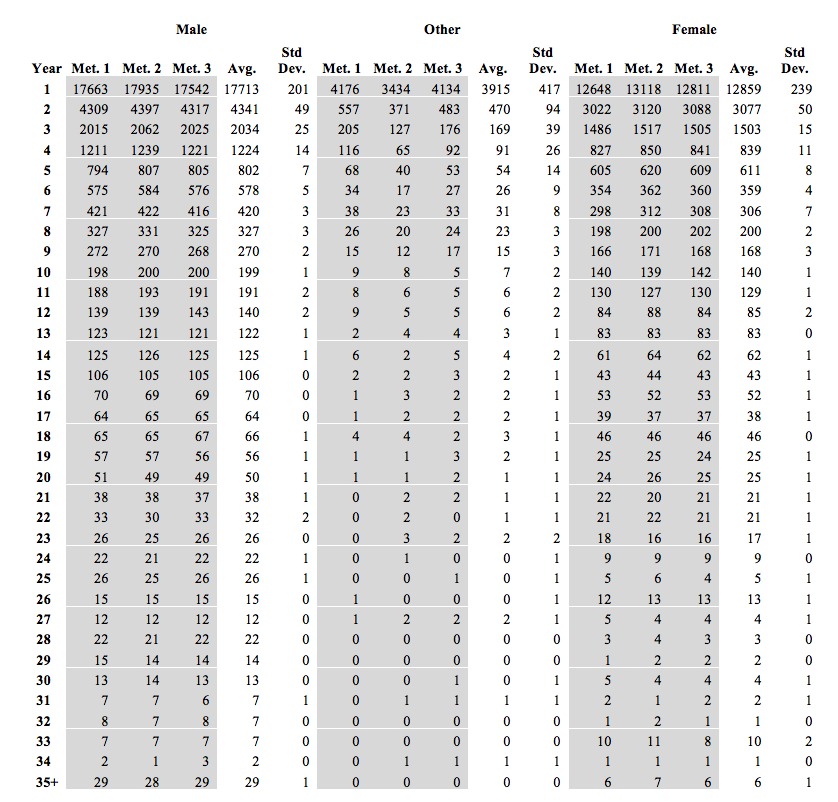 Short Fiction
“This is Your Child, Who You Love”
“References:”
“How Did They Get You?”
“Opiates of the People”
“So It Fermented, in Bitter Florals with a Lasting Spiced Finish”

Poetry
“Echoes Through the Vacuum”
“By the End”